Fashion amplifies protester’s voices during the Women’s March, led by an artistic intervention where t-shirts and overalls were covered with gendered insults

If the current political situation has you wondering what you can do to stand up to power, your closet might be a good place to start. Ever since Maria Grazia Chiuri, the super politicized creative director of Dior, debuted her “We Should All Be Feminists” t-shirt, political messages have come back to center stage in fashion. This power is taken to its extreme on social media, where a picture of an article of clothing in the right place can influence thousands or millions of people.

With that in mind, many women who participated in the New York Women’s March chose to wear pieces that highlighted their core political beliefs. There was even an artistic intervention with jumpsuits forming the canvas. Painted with bricks, the overalls were the symbol that they decided to use to transform the body into a message. “Overalls represent the entry of women into the labor market, which happened during World War II when they were called to work in factories,” recalls designer Andrea Lauer, who worked on the intervention with the organization PDA Collective. “Some of the bricks are covered with phrases Trump has used to belittle women,” she explains. The intervention also occurred in 18 other US states at the same time.

Wearing a piece of clothing with a political message won’t transforms the apolitical into instant activists. But the history of fashion includes many symbols that played significant roles in political history, like the iconic women’s suits of the women’s suffrage movement of 1913.

Over a century later, fashion continues to be a starting point for identifying people who share similar ideologies. The 2018 Golden Globe was a prime example, with most actresses opting to wear black in solidarity with #TimesUp, the anti-harassment movement that started in Hollywood.

The women who took to the streets of Manhattan last Saturday also used their outfits to spread their own messages. Here’s what they said about the ways they’re using fashion as a political tool: 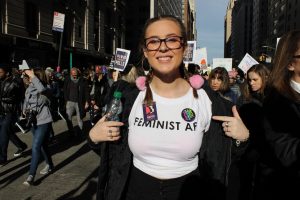 Feminist, Margaret wore this shirt because she believes in equal rights between genders. “I chose to wear this because I want to represent how strong we women can be.” 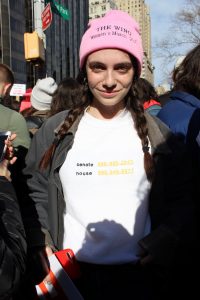 The Senate number is stamped on Emma’s T-shirt. “I want to draw attention to people calling the rulers. This is a way for our voice to be heard.” She recalls that now is an important time to ask for protection of the DACA, a program that protects immigrants who have arrived in the United States illegally as children from deportation. 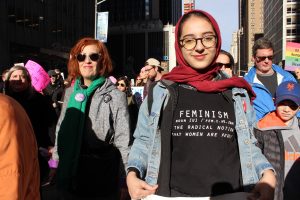 Muslim, Selma studies at a girls-only school, and there she learned the meaning of feminism. “I think feminism celebrates equality, and I hope I don’t have to deal with today’s misogyny when I enter the workforce.” Selma wears the shirt regularly and revealed that she already got criticized by other women on the street. “But I don’t mind comments from other people. The more they complain, the more I’ll wear it.” 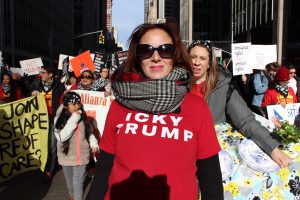 “I got this shirt from the Jack White from White Stripes. We worked together, and he gave it to me,” recalls Rocky. Jack created this shirt two years ago, and the idea behind it was to use the colors of Trump’s campaign to criticize him. “I always wear this T-shirt in protests because it’s a way of expressing without having to speak. I use creativity to express myself.” 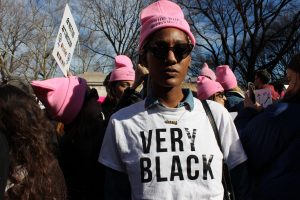 “Sometimes I like to dress in pieces that represent strength and have a proposal,” Alex explains. “The message reinforces and expresses how I feel today and every day, very proud of being black.” 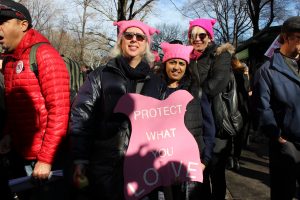 Art dealer Amy Wolf hand-knitted pussy hats, which became the symbol of the Women’s March in 2017. “I did it for myself and my friends last year. It’s a way to get a message across, but with humor. “